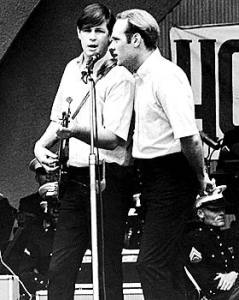 The Beach Boys are definitely planning on celebrating their 50th anniversary with a new album. According to Billboard, the singer says the album should happen in 2012.

“Where we’re at right now is Brian’s [Wilson] written some songs, I’ve written some songs [and] we’re talking very seriously about getting together and co-writing and doing some new music together,” Love said. “He’s been doing his own touring, we’ve been doing ours and so we haven’t really been able to lock into that, but it looks like this fall we will. It just makes a lot of sense with a milestone such as 50 years to get together and do something.”

As for a possible live performance featuring Love, Wilson, Bruce Johnston and Al Jardine, he said: “I think that there’s definitely more than a possibility that will happen, but to what degree I don’t know. It’s a little early to say, but I definitely think it would be more than worthwhile. It would be really special to commemorate that milestone with some personal appearances.”
Via: Gibson