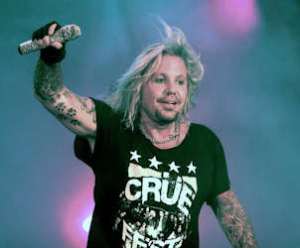 The rock legend – who lives in Las Vegas but is currently on tour celebrating his band’s 30th anniversary – will be honoured at the ceremony in the Las Vegas Hilton on August 21.

Vegas Rocks! Magazine Publisher Sally Steele said: “We will be honouring Vince with the Lifetime Achievement in Rock ‘n’ Roll” Award, and there is no one that deserves it more than Vince.

“Vince has done so much over the years for charity since he has lived here in Las Vegas and done so many events that has made this town buzz with excitement. It is especially a thrill to me personally to present this award to Vince, since I started this publication seven years ago to honour and glorify my favourite band Motley Crue.

“We are also planning on having a secret special guest present Vince’s award to him with me, so stay tuned!”

Motley Crue has sold more than 80 million copies worldwide and released their last studio album, ‘Saints of Los Angeles’ in 2008 while Vince’s latest solo album, ‘Tattoos + Tequila’ was released in 201

This entry was posted on 06/29/2011 by The Day Tripper. It was filed under News and was tagged with Mötley Crue, Vince Neil.